Riley Leeds' backstory revealed that her twin sister, Carrie Leeds, was killed in a car accident six months prior to the film's events--a two-car accident that also claimed the life of Madison Cummings, the teenage daughter of Juley and Dennis Cummings. The accident was caused by Madison speeding so she could reach Dennis' surprise birthday party, with Juley sending texts to Madison urging her to hurry and drive faster.

Riley became unhinged following her sister's death, with her behavior being displayed while she was working as a waitress, as she brutally attacked a man who was hitting on her, resulting in him being left in a coma. She lost her job after her friend and co-worker, Sugar, reported her, after which she ended up working at a transplant agency.

Riley used her position to search for info regarding Madison, as her organs were donated following her death. After finding the identity of Madison's parents, Riley murdered her co-worker in the film's opening, and later on, she reached out to Juley and Dennis, under the guise of a woman named Vera and claiming to have received Madison's heart. Vera's first meeting with the couple included a chilly demeanor from Juley, who felt guilty about alienating Vera to the point that she decided to invite her to their home for dinner, while offering her a job. Later on, Vera met with Juley again and confessed to taking Madison's necklace on the previous evening, adding that she felt a connection to Madison, only to Juley to allow her to keep the necklace and give her $5000 to help pay for her medications.

Dennis was shocked and outraged over Juley giving Vera money, while also voicing his suspicions of Vera's true nature. After Vera crashed a party at their house, both Dennis and Juley became upset over Vera's actions and ejected her, with Dennis telling her to never return to their house. Afterwards, the couple found their car vandalized and quickly suspected Vera, who later visited their house with a bottle of wine, while offering to move on from their last encounter. The couple became astonished over Vera's conduct and ejected her again, with Vera responding by asking what Madison would think about their treatment of her. Angered, Dennis screamed at Vera to leave, with the deranged blonde breaking her wine glass before ominously stating that they would regret their actions.

Juley found out that Dennis had searched for info regarding the recipient of Madison's heart, leading to the couple learning that the actual recipient was Sarah Williamson, not Vera, who (while donning a disguise) later attacked Juley with a knife as she left work, turning heel once again. The couple went to Detective Quinn with their report, and later went to the agency, where they learned from employee Bethany about Vera's true identity as Riley Leeds. A search for the name uncovered the truth: Riley's twin sister was killed in the same accident that took Madison, and they later took their discovery to Quinn, with Juley realizing that Vera was seeking revenge against her for (in her mind) being at fault for her sister's death.

Quinn visited Sugar's home and gained more info regarding Riley's backstory; all the while, the villainess was waiting outside her former friend's house in ambush. After Sugar returned home later that evening, she was suffocated and stabbed to death by Vera, who sent Quinn a text claiming to have information. After Quinn arrived, the evil Vera strangled Quinn to death inside his car, using a belt as a weapon.

The film's climax saw Juley head to a business meeting inside a lavish house, only to find Riley/Vera inside holding a gun, having arranged the meeting to lure Juley into a trap. She revealed her true identity to Juley and mentioned her deceased sister, while blaming Juley for her death, as she urged Madison to hurry home. Juley apologized and voiced her guilt over the accident, though Vera later ordered Juley to call Dennis and tell him to pick her up, threatening to kill her if she didn't comply. Juley made her escape by slashing Vera's face with a nail file during the call, only for the villainess to taunt her by stating that all of the doors were locked from the outside.

The callous villainess promised to make sure Juley died quickly, while asking if Madison did the same and stating that after she kills Dennis, she'd tell him he should have driven faster--referencing Juley's texts to Madison. After shooting her way into the bathroom where Juley was hiding, Vera saw Juley on the floor and figured that the bullet struck and killed her, only for Juley to blind Vera with hairspray and escape. Dennis arrived and clocked Vera with a crowbar, but once the couple entered their car, Vera emerged again. At that point, due to Juley being successful at outwitting her earlier and preparing to escape, thus foiling her desire for revenge, Vera had completely lost all sense of sanity and flew into a monstrous rage, using the same weapon to smash the window and attack Dennis in a last-ditch attempt to kill him. At that moment, Juley left her car and pointed a gun at Vera, and before Vera could react, Juley shot Vera to death, bringing Vera's rage, monstrosity, and desire for revenge to a permanent end. 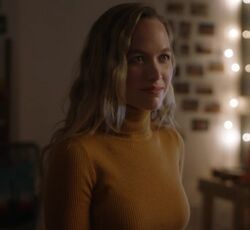 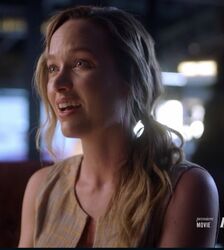 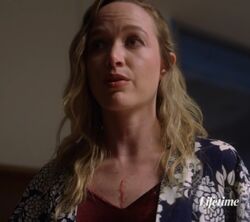 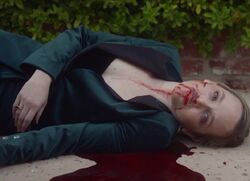 Riley/Vera after being shot by Juley
Community content is available under CC-BY-SA unless otherwise noted.
Advertisement