Rosalyn Wohl (Alicia Witt) was the hidden main villainess from WWE Studios' 2012 action-comedy, Bending the Rules. She was an attorney who worked alongside Theo Gold (one of the main protagonists).

Rosalyn was shown with Theo during his prosecution against Detective Nick Blades for corruption, and she was shown once again consoling Theo after his father's classic car, a 1956 Studebaker Golden Hawk, was stolen (among other things that had befallen Theo). As the film progressed, it turned out that the theft was part of a criminal conspiracy centered around a hit list created by Willy Van Bieber, a convict on death row. The list was a newspaper with license plate numbers, which were connected people who informed on Van Bieber and were getting killed one by one. Among the informants was karate instructor Ed Mackie, who was shot to death by a traffic cop.

Gil Ott was also on the list, but following his arrest by Nick, he was bailed out by Rosalyn. The film's climax had Gil abducting Rosalyn, who phoned Nick and stated that Gil will release her in exchange for the list. Nick later met with Gil, who had Rosalyn at gunpoint, while Theo and Detective Garcia were close by. Gil demanded the list, only for Nick to respond that Happy Connors, one of his acquaintances, has it. Gil dismisses the claim, only for Rosalyn to suddenly confirm Nick's statement, much to Gil's surprise. Shortly afterwards, Rosalyn turned heel by shooting Gil to death and stating that she doesn't need the list.

Following her surprise heel turn, Rosalyn revealed herself as the mastermind of the killings, as well as Van Bieber's daughter. She took Nick's gun from his possession and held her own gun at him, while boasting about her fake kidnapping; figuring that Nick would save a "damsel in distress." The villainess revealed her plan to kill both Nick and Theo, and later shot Garcia (non-fatally) when she appeared, before a gun battle ensued. After Theo arrived and got out of the car, the evil Rosalyn moved towards him, blasting Theo for putting her father on death row instead of getting him life in prison. Just as Rosalyn was about to kill Theo, Nick appeared and shot Rosalyn to death. 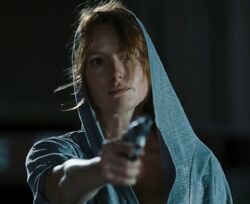 Rosalyn pointing her gun at Nick Blades following her reveal 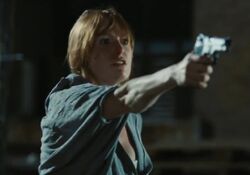 Rosalyn during her confrontation with Theo Gold
Community content is available under CC-BY-SA unless otherwise noted.
Advertisement