Phoebe Sutton, aka Lisa Nolan (Ashlynn Yennie), is the main villainess from the 2019 Lifetime film, The Wrong Mommy (airdate July 19, 2019).

Lisa Nolan's backstory revealed that she became orphaned at the age of four; her mother died of cancer when Lisa was only two, and it was two years later that her father was killed in a car accident. In between her parents' deaths, Lisa's father remarried a young woman named Carol Graham, but after his passing, Carol was left to raise Lisa on her own. Feeling overwhelmed and believing that she wouldn't be a good parental figure for Lisa, Carol left Lisa with her grandparents.

However, Lisa ended up in various foster homes shortly afterwards, and one of them was abusive, with the indication that the abuse was sexual. In her adult life, Lisa gained a criminal record, as she was arrested for aggravated assault, and she also found out that Carol had remarried and given birth to a daughter, Melanie (the film's main protagonist). Seeing Melanie's good life angered Lisa, who blamed Carol for everything that had happened to her, and she devised a fiendish and vengeful plan.

The beginning of the film showed Lisa inside the home of the now-married Melanie Anderson, as she was placing cameras all over her house while Melanie, husband Alex Anderson, and their daughter, Tina Anderson, all slept. Later on, Lisa appeared at Melanie's workplace under the name Phoebe Sutton, and charmed her way into being hired as Melanie's assistant, with her plan for the job including forcing Kellyanne (Lisa/Phoebe's former cellmate) into posing as her former boss and recommending her for the job. While on the job, Phoebe befriends Melanie and also responded to the flirtations of car dealership owner Roger Kirkland, who she later visited after babysitting Tina late one night.

The visit came after seeing that Roger had "sexted" Phoebe, and it was at the dealership that Phoebe appeared to seduce Roger, only to strangle him to death after stating that her foster father showed her the same thing that Roger did, only more up close and personal. Afterwards, the villainess began spending more personal time at her boss' home, including appearing at Tina's birthday party, where she pressured a boy Tina had a crush on into kissing her. It was after Melanie noticed Phoebe's obsessive demeanor that she informed her assistant that they should keep things professional between them. Later on, Phoebe received massive praise from Samantha, Melanie's boss, for the many deals she acquired, only for Melanie's co-worker, Laura, to reveal that Phoebe had stolen her list of clients.

Melanie fired Phoebe, who responded by sabotaging her longtime friendship with Barbara by telling her about Melanie hooking up with Barbara's boyfriend, Joel, back in college. All the while, Phoebe ended up receiving a business meeting with Barbara, and in response to Melanie informing Samantha about Phoebe placing cameras in her home, Phoebe denied the claims in front of Samantha, only to boldly admit them when she and Melanie were speaking privately, adding that Melanie was jealous of her bond with Tina and that she could have Alex any time she wanted, before she was ejected by Melanie.

Meanwhile, Melanie's backup assistant, Jason Cupp, decided to do a background check on Phoebe, and it was at his apartment that he learned that her real name was Lisa Nolan, after which he phoned Laura regarding his discovery. After entering the shower, the evil Phoebe snuck into Jason's home and stabbed him to death, and she tracked Melanie to  a treatment center where Lisa/Phoebe had stayed. Melanie had found Kellyanne at the center, though she was only told to ask Lisa's parole officer. After Melanie left, Phoebe appeared and confronted Kellyanne, who informed Phoebe that she hadn't told Melanie anything. Phoebe stated to Kellyanne that she believed her and later hugged her before stabbing her to death.

Melanie learned about Phoebe's past and her surprising connection to her mother, all the while, Phoebe visited Carol in her home and revealed herself as her stepdaughter before attacking Carol, knocking her out with chloroform. The deranged villainess then phoned Melanie and ordered her to meet her at the house, threatening suggested harm to her family if she phoned police. Melanie acquiesced, and after Alex and Tina left the room, the women engaged in a verbal confrontation. Phoebe lashed out at Lisa and blamed Carol for what happened to her, and she revealed her plan to kill Melanie and take over her life, which she felt she deserved. After taking out a gun, the villainess revealed that she would portray Melanie as a deranged woman who snapped and attempted to kill Phoebe, who would then shoot her to death in self-defense. Regarding Carol, Phoebe gave the indication that she had already killed her while declaring that Phoebe will obtain "the right life, the right job, and the right mommy", only for Carol to appear and knock out her evil stepdaughter with a bat, with Carol declaring that Phoebe was "the wrong mommy". Afterwards, Phoebe was arrested (off-screen) for her murderous spree.

An extended ending to the film (which aired on July 25, 2019 as The Wrong Mommy: The Playdate) showed Phoebe in a mental institution being visited by her therapist, Dr. Jim, who expressed his condolences for what happened to her early in life. He added that he hoped that Phoebe would find better ways to deal with her ordeal, but once Dr. Jim mentioned that he had a daughter, Phoebe began obsessively asking questions about her, with her last one being if she "needed a mommy." 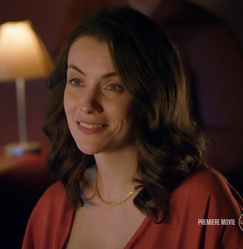 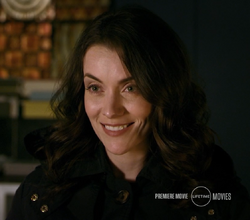 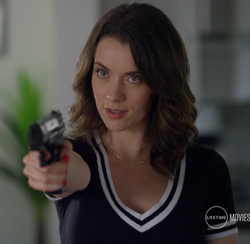 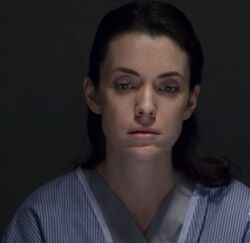 Phoebe in a mental institution in the extended ending
Community content is available under CC-BY-SA unless otherwise noted.
Advertisement