Love Quinn (Victoria Pedretti) is a major villainess from Season 2 of You (airdate December 26, 2019).

Love Quinn is the daughter of Dottie and Ray Quinn, as well as the twin sister of Forty Quinn. She served as the object of obsession for Joe Goldberg (the series' main protagonist), who moved to Los Angeles following the events of Season One--which ended with Joe killing his last obsession-turned-girlfriend, Guinevere Beck. Joe approached Love in the season opener, "A Fresh Start," introducing himself as Will Bettelheim (taking the name from a hacker he abducted to hide from Candace Stone, a woman who survived Joe's actions).

Love's backstory was revealed later in the episode, as Joe noticed that she was wearing a wedding ring. She revealed that she was widowed, having lost her husband, James, prior to the season's events. Despite attempting to do things different from his pursuit of Beck, Joe ended up in a relationship with Love, which was officially consummated in episode 2.03, "What Are Friends For?." Two episodes later in, "Have a Good Wellkend, Joe!," more of Love's backstory was revealed while she and Joe attended a wellness retreat thrown by Dottie and Ray, which revealed the family's immense dysfunction. After she was berated by Dottie, Love revealed that when she and Forty were 13, their parents hired an au pair, Sofia, who was 19 years of age. According to Love, Sofia molested Forty, and she was let go after their parents caught them, which was followed by Sofia committing suicide.

Also attending the retreat was Forty's new girlfriend, Amy Adam, who was actually Candace, as she was on her quest to expose Joe. However, the following episode, "Farewell, My Bunny," had Love confronting Candace inside Joe's home, as Candace was breaking in to the house. Love found out her true identity and paid her to leave Forty, but not before Candace revealed Joe's true identity and past to her. Love broke up with Joe and was briefly dating Milo Warrington, James' best friend, in episode 2.07, "Ex-istential Crisis." However, the following episode, "Fear and Loathing in Beverly Hills," had Love wanting to rekindle her relationship with Joe, who was unintentionally high on acid thanks to Forty, and had been seeing blood on his hands.

The episode ended with Joe finding Delilah Alves dead in his cage inside his storage unit, with Delilah being held captive by Joe after she found out his true identity, and that he had killed famed comedian Henderson. The season's penultimate episode, "P.I. Joe," had Joe--who was unable to remember everything from his acid high--believing that he had killed Delilah, and during his investigation, he began to suspect Forty after remembering that he confessed to killing Sofia all those years ago. Candace tracked Joe to his storage unit and locked him in his cage with Delilah, after which she called Love and set up a meeting so she could continue to expose Joe.

Love entered the storage unit and saw Joe inside with Delilah, after which Joe confessed to everything Candace told her earlier:  that he had tried to kill Candace and had killed Delilah after finding out that he murdered Henderson. Following Joe's confession, Love ran out in a frenzy and threw up in a garbage bin, where Candace approached her and consoled her. At that moment, however, Love turned heel by slashing Candace's throat with a broken bottle, and as she returned to the storage bin, she responded to Joe's question about Candace by stating that she "took care of it." The season finale, "Love, Actually," began with Love stating that Candace was going to destroy their relationship, with Joe blaming himself for Love's actions and informing her that he had told the truth in his confession. In response, Love revealed to Joe that she, not Joe, killed Delilah, cementing Love's heel turn.

The admission was followed by another surprise reveal from Love:  she was the one who killed Sofia after spotting her molesting Forty. The villainess knocked out Forty and then slashed Sofia's throat, after which she planted the knife on Forty and left him to be accused of the murder, though he avoided charges due to their parents covering for them. In addition, Love stated to Joe that she fantasized about having a family better than her own, but feared she wouldn't have that after James' death. She fell for Joe after meeting him, but after running Candace off, she paid a PI for info on Joe, and began her own obsession with him--which included finding out about his storage unit a long time in advance. Regarding Delilah, the evil Love slashed her throat with a knife after finding her in the cage, as she was an obstacle in their relationship.

When Joe asked Love about Delilah's younger sister, Ellie Alves, the maniacal villainess stated that she and Joe should frame her for Henderson's murder, adding that Ellie could be portrayed as having killed Henderson after learing that he drugged and raped Delilah. Her family could get Ellie off and Delilah would be hailed as a hero in death, and regarding Joe's protests, Love lashed out at him, stating that she killed Delilah because he killed a celebrity; making her callous statements after saying that Beck didn't deserve him. Later on, Love returned to the unit with a batch of muffins, after which Joe claimed that he couldn't eat with a body inside. He used this tactic to get Love inside the cage so he could kill her, only for Love to reveal Joe that she was pregnant with their child:  a son.

The finale's climax saw Love confronted by Forty, who found out the truth about Joe and was planning to confront him as well. Forty pointed a gun at Joe and lashed out at him as well as Love, while revealing that he had known what Love had done years prior. Just as Forty was about to shoot Joe, he ended up shot and killed by police officer David Fincher, and in the epilogue, Joe's narration revealed that Forty was posthumously accused of killing Henderson. As for Love, she and Joe moved to a suburban neighborhood at episode's end. 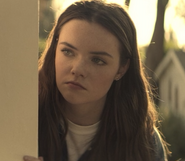 Love (as a teenager) scowling at Sofia