Villainous Beauties Wiki
Register
Don't have an account?
Sign In
Advertisement
in: Bondage Used On Villainess, Brunette, Callous,
and 13 more

Kiki (Tanya Chisholm) is the hidden main villainess from the 2021 film, The Deadliest Lie (alternately titled, A Dangerous Thing).

Kiki is the best friend of the film's main protagonist, lawyer Samantha Connelly, and in the film, the pair went out on a best friend's night out at a bar, where Samantha meets a man named Clay Davis. Samantha and Clay hit it off at first, but Clay became aggressive to the point of nearly assaulting her, though he was stopped by a woman named Giselle Christophe. Afterwards, Samantha and Giselle formed a friendship, which saw the former become more emboldened as a person due to the latter's teachings and advice.

Kiki also noticed Samantha's change in demeanor, as well as the fact that she and Samantha weren't spending as much time with each other as they did before. Giselle's influence also resulted in Samantha beginning a romantic relationship with Miles, though she was also in an inadvertent compromising position at a party that Giselle took her to, as Samantha engaged in a tryst with her client, football star Jaden Turk.

As for Kiki, Samantha voiced her regret over not having time for her in favor of Giselle (who ended up hired as the assistant to their boss, Monty), with Kiki appearing to be understanding. In actuality, Kiki had become enraged over (in her mind) being ignored and abandoned by Samantha, and afterwards, Kiki turned heel and went on a twisted and murderous mission to regain Samantha to herself. Her plan included posting photos of Samantha with Jaden during the former's presentation, as well as killing Clay and stalking Samantha's house--with the murder being mentioned by police when they were called to Samantha's house.

Samantha had suspected Giselle in the crimes, believing that she had become clingy and obsessed after breaking ties with her; all the while, the evil Kiki entered Miles' home and bludgeoned him to death with a pipe, doing so while donning a hooded disguise and a Venetian mask. Samantha ended up accused of the murder, though Samantha maintained her belief that Giselle was involved, and later on, Jaden became Kiki's next victim, as the maniacal villainess entered Jaden's car and waited in ambush before strangling him to death.

The climax saw Kiki console Samantha and later state that Giselle was the last person seen with Miles prior to his murder, further increasing her suspicions. Later on, as Samantha was in her cabin, Kiki was attacked by Giselle, who later approached Samantha and stated that she was in danger. Samantha held Giselle at gunpoint with a rifle in response, after which Giselle went to Kiki's car and opened the trunk, which had Kiki inside tied up and gagged. Giselle attempted to state that Kiki was behind everything, with Kiki denying the claims and continuing to do so even after explaining her knowledge about Clay was due to overhearing Samantha's call to the police about him, with Samantha stating that she never called the police about Clay.

Giselle stated that Kiki's motive was wanting Samantha all to herself, as well as her jealousy of Giselle being in Samantha's life, with Kiki continuing her denial before charging after Giselle. Samantha watched as both women brawled, but just as Giselle grabbed a rock and raised it up towards Kiki, Samantha shot Giselle to death before Kiki grabbed her keys and drove off with Samantha. Kiki denounced Giselle as being crazy; however, Samantha later heard a report about Jaden's body being found, leading her to suspect that Kiki was the true villainess all along. The final scene showed Kiki's villainous disguise in the back of her car, officially revealing Kiki's true heel persona and giving the indication that she completely got away with her various crimes. 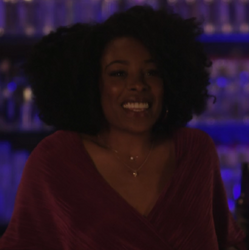 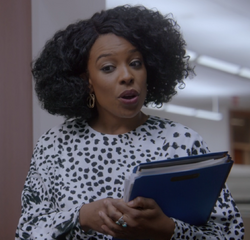 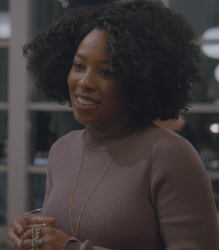 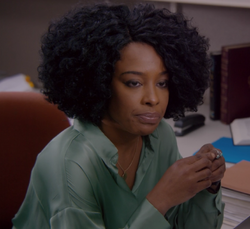