Katie Webber is a nurse who lives with her older sister, Sasha, and Sasha's boyfriend, Brett Hobbes--with Sasha serving as Katie's legal guardian after their mother left them. She was introduced as a social outcast, having trouble making friends; though after seeing her classmate, Ashley, hospitalized and in need of a liver transplant, Katie befriended Ashley and decided to donate her liver due to being a match for her rare blood type. However, when Katie informed Sasha about her plans, Sasha denied permission, leading to Katie forging Sasha's signature on a consent form so she could make the donation.

After the operation, Katie received gratitude from Ashley and her parents, Dan and Rena, with Ashley giving a half-heart pendant to Katie, who she considered a sister. Katie's happiness over having Ashley's kinship was interrupted by Sasha, who found Katie and realized that she had the operation and forged Sasha's signature, but just as Sasha was about to expose her, Katie stated that Ashley's family would pay for the operation. To further appease Sasha, Katie stole Rena's bracelet and gave it to Sasha as evidence of her claims, but afterwards, she received messages from Sasha demanding money, only for Katie to ignore them and enjoy living with Ashley.

Sasha ended up dining with her sister and Ashley's family after encountering both Ashley and Rena, and as Sasha left for the bathroom, Katie followed, leading to a confrontation. Sasha's demand for money was overheard by Ashley, who corrected Sasha by stating that money isn't given for an organ donation, only for Sasha to blackmail Ashley into paying $5000, under the threat of exposing an illegal operation. After the siblings returned home, Katie confronted Sasha over her actions, only Sasha to lash out at Katie for being charitable and stating that she was desperate to have Ashley befriend her. Sasha's continued bullying and verbal lashing drew anger from Katie, who later shoved Sasha and sent her headfirst into a counter, killing her instantly.

Upon seeing that she had killed her sister, Katie called 911 and claimed to Ashley that Sasha's death was caused by her own drug use, after which Katie continue to bask in living with Ashley and her family. However, Katie overheard Ashley voice her suspicions to her boyfriend, Jacob, regarding Sasha's death and the fact that Sasha was wearing Rena's bracelet, leading to Katie sneaking back into the house and placing the bracelet back in Rena's jewelry box. It was at that moment that Katie was confronted by Brett, who asked about Sasha's death before demanding money from Katie. Brett later broke into the house and attacked Dan, with Katie recognizing Brett during the break-in. During Dan's hospitalization, Katie stole drugs from the hospital and met with Brett that night, where she gave him the stolen drugs as well as some money to get away.

At that moment, Brett attempted to force himself on Katie, who injected Brett with a chemical-filled syringe, while stating his death as a drug overdose. Following the ordeal, Ashley became fed up over her knowledge of Katie's actions leading to the operation, with Katie responding with a claim that her actions were done so she could continue to enjoy living with Ashley's family, who she considered her own. Ashley stated that her family was not Katie's before ending her friendship, though Katie overheard Jacob insist to Ashley that she tell Rena everything about Katie, who is later found by Ashley in her room. Katie fully turned heel on Ashley by knocking her out and tying her to the steering wheel of her car, where Ashley woke up and shouted for Katie to let her out.

In response, the evil Katie revealed her plan to stage Ashley's suicide and console Ashley's parents, while reminding Ashley that she saved her and that all she wanted was an actual family of her own. The maniacal villainess continued to ignore Ashley's pleas while confessing to killing Sasha and Brett, and after leaving Ashley to die in a planned carbon monoxide death, she typed Ashley's suicide note before Dan entered looking for Ashley. Though Katie claimed not to have seen Ashley, Rena entered the garage and found Ashley in the car before pulling her daughter out and taking her to her room.

Katie appeared and claimed that Ashley had been acting strangely, after which Rena and Dan asked Katie to watch Ashley. After seeing that Ashley was still alive, Katie attempted to suffocate Ashley to death, only for Ashley to grab Katie's necklace and jab her hand to free herself. Rena entered and was informed by Ashley that Katie attempted to kill her, which was followed by the villainess admitting to her evil actions, claiming that she committed them to remain with Ashley's family before breaking down. The film's final scenes showed Katie (who was arrested) in a prison facility, where Ashley visited her. Katie thanked Ashley for visiting her and voiced her somber demeanor over her actions, with Ashley stating that she was desperate and troubled before engaging in "girl talk" with Katie. 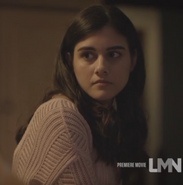 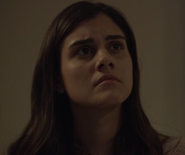 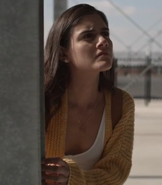