Kathy Owens (Stephanie Young) is the main villainess from the 2006 film, Inspector Mom.

Kathy Owens is the president of the Garden Club, which had Bernice Haskins as a member. Bernice was spotted by main protagonist Maddie Monroe with girls' soccer coach Joseph Rovira, with Maddie learning that the two of them were engaged in an illicit affair. After Rovira was found murdered, Bernice was among many suspected, as was Maddie's husband, Craig Monroe, as the couple's daughter, Tara, was on the team, and Craig had engaged in a pair of physical confrontations with Rovira. Maddie's confrontation with Bernice saw the affair revealed, though she was cleared as a suspect when Maddie was attacked by a masked villainess, who was revealed as Kathy.

Though Kathy was introduced as having an immensely chipper demeanor, it was revealed to be a cover for her true deranged and malevolent personality. As it turned out, Kathy was also having an affair with Rovira, and it was revealed that Rovira coerced Bernice to steal money from the Garden Club, which Kathy believed was for herself and Rovira so they could run off together. However, Kathy found out that Rovira was using the money to gamble on his team, leading to Kathy confronting Rovira and attempting to seduce him. Once Rovira turned down her advances, Kathy turned heel by stabbing her lover's neck with a pen laced with a deadly insecticide, and when the poison didn't work fast enough, the villainess bludgeoned Rovira to death with his megaphone. After spotting Ralph Zander witnessing the murder, the evil Kathy killed him to maintain his silence.

Kathy tracked Maddie to Bernice's house in the film's climax, which led to the attack and reveal. The deranged villainess held Maddie at gunpoint and forced her to drive, all the while, Maddie dialed detective Rob Campbell's number and allowed him to overhear everything. Maddie correctly identified Kathy as the masked villainess, and figured out that she was also having an affair with Rovira, as Bernice revealed Rovira's pet name, "Mi Lora Pequeña"--Spanish for "My Little Parrot"--due to Kathy repeating everything she hears. Kathy confessed to everything, revealing that she knew about the thefts and believed that the money was for her and Rovira, only to become angry when Rovira gambled it away. She admitted to killing Rovira as well as Zander, and she attempted to kill Maddie with the poison, before she was stopped by Campbell, who handcuffed and arrested the maniacal villainess. 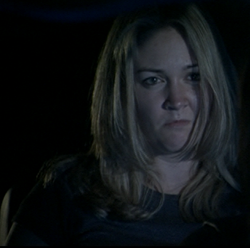 Kathy unmasked during her reveal 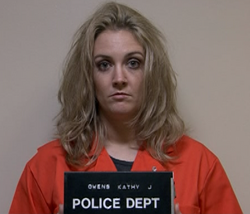 Kathy's booking photo after her arrest
Community content is available under CC-BY-SA unless otherwise noted.
Advertisement