Juila Byron-Kim was introduced as the lawyer for Leonard Wellesley, who was under the care of main protagonist Katie Franklin and had passed on during the film's events. She appeared to Julia and her husband, Adam Kattner, at a service for Leonard (who was cremated), after which they discussed Leonard's will at his home. Katie was surprised to learn from Julia that Leonard named her as the sole heir, meaning that she received Leonard's home and finances in his will.

Leonard's death was being investigated by Detective Chesler, who suspected both Katie and Adam after learning about the contents of Leonard's will. In addition, the couple had found over $100,000 in cash in the attic, as well as a collection of diamonds, with the money being placed in a safe deposit box. After Chesler visited Katie with her suspicions that Adam acted alone in Leonard's death, Katie visited Julia with her own fears, with Julia appearing to agree with Katie's suspicion that Adam may have killed Leonard. Julia was informed about the money and the diamonds, and was later taken by Katie to their deposit box, only to find that the money was gone.

Katie returned home to find that Adam had taken out the money after learning that the diamonds were part of a jewelry store robbery that was committed by Mickey Hayden, who frequented the house posing as a realtor just so he could regain the diamonds. Mickey later appeared at the house demanding the diamonds, after which Adam held Mickey at gunpoint while Katie was held hostage. A shootout ended with both Mickey and Adam killing each other, with Julia later arriving and expressing apparent horror over the scene, only to later ask Katie about the diamonds.

Katie stated that it was Mickey who killed his partner, Ethan Doyle, before killing Leonard by tampering with his medication, and in response, Julia ranted that Mickey wasn't as smart as he believed he was--adding that his plan to double-cross Ethan only resulted in Mickey getting locked up while Ethan got away with $3 million in diamonds. Katie pointed out that she never told Julia about the diamonds' value, and in response, Julia turned heel by revealing herself as a conspirator in Mickey's scheme. She stated that she served as Mickey's defense and made a deal with him to help him find the diamonds, and she had known about Ethan working as Leonard's gardener but didn't know where he was. In addition, the villainess covered up for Mickey after he killed Leonard, and later devised the will to name Katie as the benefactor.

After picking up Mickey's gun, the evil Julia demanded the location of the diamonds from Katie, who stated that she didn't know where Adam placed them, and wouldn't tell her anyway. The villainess pointed the gun at Katie, after which Chesler entered the house, leading to Julia introducing herself as Katie's lawyer (while holding a gun to Katie's back). Chesler ordered Julia to put up her hands, only for the villainess to unleash her gun and end up shoved away by Katie. After knocking Katie down, Julia attempted to shoot Chesler, who later fired her own gun and killed Julia. 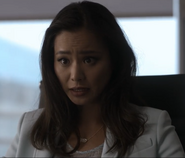 Julia after being shot by Chesler
Community content is available under CC-BY-SA unless otherwise noted.
Advertisement