Jennifer Richmond (Polly Draper) was the main villainess from "The Verdict," episode 5.18 of The Hitchhiker (airdate November 4, 1989).

Jennifer Richmond was a famed prosecutor known for her stellar and unprecedented record; she had 36 consecutive convictions entering the events of the episode, which saw her prosecuting Manuel Ortega for a drive-by shooting. She was established as being ruthless in her quest, stating that Manuel had ties to a street gang known as the Black Hill Knights. However, Jennifer's streak was in jeopardy due to a lack of evidence tying Manuel to the murders, and to keep her record intact, Jennifer turned heel in her quest--which included killing Manuel's defense lawyer, Arnie.

The villainess committed the murder with a knife that was supposedly found in Manuel's car on the night in question, with a lighter also being found in the same vehicle. Jennifer's evil actions were represented by an imaginary gang member who appeared throughout the episode, with the man representing Jennifer's ruthless ambition. After the murder was committed, Jennifer allowed Ted, a detective and a friend/lover of hers, to inspect the prints on the weapon, and after Manuel was convicted, Jennifer visited him and took Manuel's lighter under the guise of helping him. In actuality, the evil Jennifer planned to continue her heel persona and (most likely) plant the lighter to further her case; however, the episode's climax saw Jennifer return home after being "stalked" by that same gang member.

Jennifer's reveal as a villainess came during her call to Ted, as he revealed that the only prints on the knife were hers, after which the gang member entered her house and confronted Jennifer. At that moment, Jennifer took out a gun (which Ted gave her for protection) and fired shots at the gang member; all the while, the shots were heard by Ted and other detectives who were at the house. After finally entering the bedroom, they found Jennifer deceased of a single gunshot, having committed suicide. The scene completed the reveal that Jennifer and the "gang member" were one of the same; though it remained unknown if Jennifer's suicide was out of guilt or to avoid the consequences of her actions. 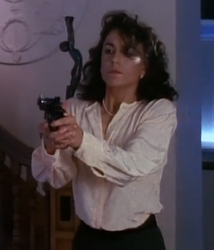 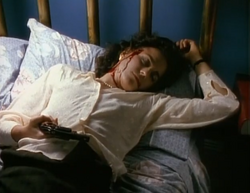