Casey Paulson (Most Likely to Murder)

Casey Paulson (Madison McLaughlin) is the main villainess from the 2019 Lifetime film, Most Likely to Murder (airdate December 14, 2019).

Casey Paulson was a high school cheerleader who was introduced as the survivor of a house fire that took place a year before the film's events. Though it was true that she survived, the fire was set intentionally by Casey, who did so to kill her abusive father, who not only harmed Casey but his wife (Casey's mother), Laura Paulson.

Casey's father was killed, and while Laura and Casey survived; though Casey's hair was burned off;  all the while, Sean, her neighbor and a close friend of Casey's, covered for her by claiming he had set the fire before fleeing town. Casey ended up taunted by her former friends, Hailey and Clair, though it was also revealed during the film's progression that when the three of them were friends, Casey was the alpha mean girl of the three.

The film's events showed Casey returning to school after a month away due to a mental breakdown, and it was revealed that she and Laura were living with the latter's new boyfriend, Harlan--who was established as being somewhat abusive. Casey found herself being harassed and bullied by Hailey and Clair, which included the girls removing Casey's wig and dumping it in the toilet. The bullying was noticed by Reagan (the film's main protagonist) and Taylor; the former being the head of the cheerleading squad, leading to both of them befriending Casey, with Reagan ignoring Clair's statements that Casey was as much as a bully as herself and Hailey.

Casey was confronted by Hailey and Clair, who took Casey's phone and placed it in their locker, while warning Casey to stay away from Reagan under the threat of exposing the fact that Casey had unflattering photos of Reagan on her phone. After the girls left, Casey broke the lock and retrieved her phone from the locker, and while watching cheerleading practice, she activated a fire alarm, causing a distraction that led to Clair falling and breaking her leg. The villainess denied pulling the alarm, and later on, Casey gave her speech about house fires to the class, while removing her wig and speaking about how she survived her own house being on fire, with Hailey videotaping Casey with her battered scalp.

Afterward, Hailey confronted Casey and stated that she knew that she caused Clair's injury, and ordered her to confess under the threat of releasing her video to the public. After Casey refused and Hailey posted the video, she later phoned her guidance counselor Deborah and feigned worry over Hailey taking pills; in actuality, Casey acquired a batch of pills Sean, and planted them in Hailey's backpack, leading to Hailey being taken away in handcuffs once they were found. All the while, Casey was being nominated for Most Inspirational Student with help from Reagan and Taylor. Later on, Hailey attacked Casey and berated her for setting her up, while also screaming at Casey to admit her actions. In response, Casey grabbed a bat and struck Hailey's head, causing her to land headfirst on a rock, killing her. After the murder, Casey and Sean buried Hailey's body in an undisclosed area, leading everyone to assume Hailey had simply run away.

Casey received a full makeover from Reagan and Taylor, and found herself back on the cheerleading squad; part of her plan to have her old life back to the way she wanted it. Later on, Casey approached Harlan and held him at knifepoint; threatening him to leave her and Laura and never return, adding that she would set him up as being incestuous and physically abusive towards her. Casey was invited to a party by Reagan, after which she brought Sean and set him up with Reagan while she was with Vance, the object of her affection. However, Vance told Casey that he had feelings for Taylor, who began to question Casey's demeanor to Reagan.

With Taylor now an obstacle, the evil Casey planned to get her out of the way, beginning with using Taylor's phone to videotape Sean and Reagan making out. This was done to drive a wedge between Reagan and Taylor, which works; Reagan was led to believe that Taylor posted the video and even ejected her friend from her home after seeing the video. Casey was later informed by Vance that she won Most Inspirational; all the while, Casey was informed by Sean that Hailey's body was found, prompting Sean to plan their escape. Casey refused and responded to Sean's pleas with a hug, only to grab Sean's gun and shoot him to death.

The film's climax saw Taylor break into the guidance counselor's office and take Casey's file, which she gave to Reagan as proof of Casey's true demeanor. Afterward, Reagan met Casey before her acceptance speech and confronted her with the truth that she had intentionally set the fire that killed her father. The psychotic villainess eventually confessed, revealing that her father was abusive and he deserved to die, adding that the only regret was her hair being burned off. She also admitted to her other villainous actions, including killing Hailey, stating that they were all in her way and that she had set it up so that the police would believe Sean was responsible for Hailey's death. Reagan informed Casey that she would make sure she gets help, only for Casey to knock out Reagan with a fire extinguisher, tie her up, and gag her with duct tape. The villainess threatened to kill Reagan and set it up as "just another tragic teen suicide" before getting dressed and accepting her award.

While making her speech, Reagan resurfaced from her capture (having used the box cutter Casey threatened her with to cut herself free) with a recording of her full confession, after which police--having been called by Taylor--arrived and arrested Casey, who screamed at the arresting officers and protested that she deserved the spotlight she was in. The film ended with Casey, with her original wig, in a mental institution befriending another patient, suggesting that she would be Casey's next victim. 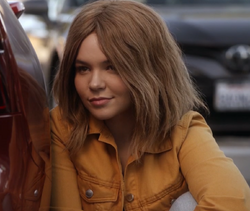 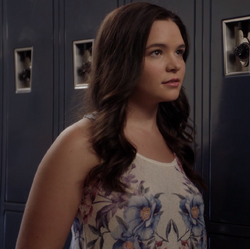 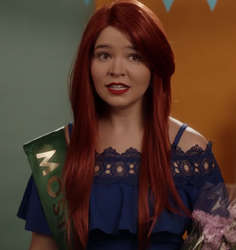 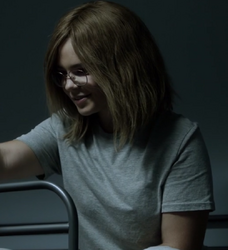