Alison Caster (Hannah Barefoot) is the main villainess from the 2019 Lifetime film, The Killer Next Door (alternately titled, Hello Neighbor and Kill Thy Neighbor; airdate March 30, 2019).

Alison Caster is the twin sibling of Matthew Caster, and in the beginning of the film, Matthew and his pregnant wife, Julie (the film's main protagonist) were driving late one night, with Matthew speaking fondly regarding the upcoming birth of their new baby. At that moment, a car sped behind them and crashed into the Casters' vehicle; killing Matthew and hospitalizing Julie, who gave birth to a son, named Matty. Alison was first shown holding her newborn nephew, while Julie's mother, Katherine, informed her that her husband had passed, bringing immense heartbreak to Julie.

Six years later, Julie and Matty moved into a suburban community, under Alison's suggestion. Alison welcomed her sister-in-law and nephew with open arms, and also got her a job with a local gym, after Amy Ferguson--one of the employees--was suddenly killed in her car. Throughout the film, Julie was subjected to stalking as well as the fear that Matty had gone missing, with Julie and her neighbors forming a search until Alison returned with Matty and informed her that she took Matty to the amusement park, and that she had informed Julie about it, a claim Julie denied. The incident became more problematic for Julie, who had been targeted and insulted by her neighbors--mainly on the website, "Hello Neighbor," as the incident increased the cyberbullying.

Later on, Alison was confronted by Marisol Gracielas, a nanny hired by Julie, while attempting to pick up Matty. Marisol stated to Alison that she couldn't take Matty whenever she wanted, with Alison reminding Marisol that she was Matty's aunt. Marisol informed Julie that she had something to tell her regarding Alison, and she drove out one night to find the home of the person who had been attacking Julie on social media. The house she drove to belonged to Alison, with Marisol voicing her suspicions before she was bludgeoned to death by a hooded assailant, using a colored rock as a weapon.

Alison's heel turn and reveal were cemented when she was shown in her hooded disguise after the murder, and regarding a motive, Alison had blamed Julie for her brother's death, leading to her murderous revenge. She had been stalking Julie and taking certain photos of her and posting them to damage her reputation as a mother, and she had killed Amy to make sure Julie got hired. The deranged villainess had also murdered the neighborhood's security guard by beating him to death with a crowbar, and she killed Marisol because she was on the verge of exposing Alison's heel persona to Julie. As she looked at framed photos of her deceased brother and Matty, the evil Alison spoke to Matthew (in her mind) and revealed her plan to take Matty, who she saw as a reincarnated version of her brother.

Alison's torment of Julie continued when she attacked Julie's new boyfriend, Blake, with a crowbar, breaking his leg in the process. All the while, she continued her twisted doting ways to Matty, including an incident where she got in bed with her nephew and told him to call her "Mommy." After Blake's attack, Julie began to realize that her sister-in-law was behind everything, and she worked with Blake to set a trap for her, which included Julie informing Alison that she was fired from her job (which wasn't true), as well as Julie and Blake posing as Jeremiah, a concerned member of the site who reached out to Alison regarding Julie's instability and arranged a meeting with her.

The fiim's climax has Julie's trap working, as she visited Alison while possessing a stuffed dinosaur for Matty. Alison's statement that she was waiting for someone led to Julie revealing herself as "Jeremiah" and accusing her sister-in-law of targeting her. Alison's feigned denial was followed by the villainess pointing a gun at Julie and blaming her for Matthew's death, adding that Matty was a version of her brother and that she deserved him over Julie. She also boldly admitted to the murders, and boasted that she would call the police and portray Julie as a deranged and murderous psychopath who attacked her with a knife. To play up the ruse, Alison smashed a framed photo and cut her right arm with a shard of glass.

Once the police began arriving, the women engaged in a brawl for the gun, with Julie gaining possession of the weapon after police entered with their own guns. At that moment, Alison attempted to convince the officers that Julie attempted to kill her, with Julie denying everything and telling them to pick up the stuffed dinosaur, which was revealed to have a camera inside. Julie gave the order to rewind and play, uncovering Alison's confession to killing Amy Ferguson as well as her other actions. At that moment, a horrified Alison was handcuffed and arrested, with the psychotic villainess desperately screaming that she was set up and threatening to kill Julie, before quickly breaking down into a mindless rage and constantly scream her untrue belief that Matty loves her as she was taken to jail to face a long sentence for her crimes. 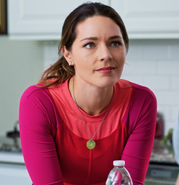 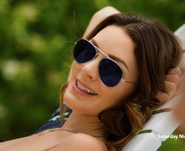 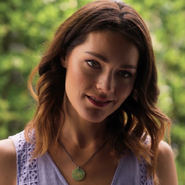 Add a photo to this gallery
Retrieved from "https://villainous-beauties.fandom.com/wiki/Alison_Caster_(The_Killer_Next_Door)?oldid=8924"
Community content is available under CC-BY-SA unless otherwise noted.